Judging by the number of material used for burials per year, there is definitely a need. According to Mary Woodsen, a science researcher at Cornell University, an estimated 60,000 tons of steel and 4.8 million gallons of embalming fluid are buried each year. That’s enough material to build eight Eiffel Towers. To give the slowly but gradually growing phenomenon even more kudos, there is now a committee called the Green Burial Council.

Eco friendly burials use predominantly biodegradable material, or e-coffins. Bodies are wrapped in or placed in a pine coffin and put to rest where they then decompose and become part of the earth. It’s a nice idea to know that your body is able to return to the earth after you are put to rest. While it’s definitely a personal choice, it’s comforting knowing that you can still keep your values, even at the end; dust to dust.

The Green Burial Counsel performs ecological surveys of the cemetery grounds and sets rules that include hand-digging the grave, replacement of the same soil that was dug up, and no vault or cement grave liners. Only biodegradable material is allowed to be buried with the bodies. 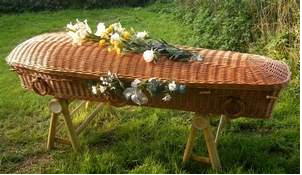