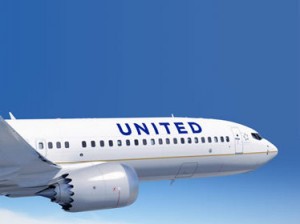 Kerry Drake’s mother was dying. She’d suffered from rheumatoid arthritis for decades and the drugs used to treat her condition had decimated her immune system. One morning his brother called him to say her time had come.

Drake caught the next flight from San Francisco, where he works for the federal government, to Lubbock, Texas, via Houston.

“I knew this itinerary was a risk because the stopover in Houston was only about 40 minutes, and my connecting flight was the last flight to Lubbock that day,” he says. “But I needed to get there as soon as possible, so I took the risk.”

As it turns out, United flight 667 was delayed leaving San Francisco. Drake was visibly distraught. You can’t prepare for a moment like this, but now came the very real possibility that he wouldn’t have the chance to see his mother before she passed away.

A flight attendant, Sofia Lares, tried to comfort him. “She said she would do everything she could and brought extra napkins for my tears,” Kerry says.

Another flight attendant, Lan Chung, asked Kerry for his flight number and relayed it to the captain.

Flight 667 made up some time enroute to Houston, but not enough. By the time Drake’s plane landed, his connecting flight had left the gate. At least that’s what he thought.

“As I was running up to the gate, the gate agent saw me coming and shouted, ‘Mr. Drake? We’ve been expecting you’,” he said. “That’s when I knew they had conspired to help me. She waved me onto the plane without looking at my boarding pass.”

United had held the aircraft for him. Not only did he make it to Lubbock as scheduled, but so did his luggage.

“Had I missed my flight to Lubbock, I would not have been able to tell my mom goodbye,” Drake said. “When she died, I realized I was wiping away my tears with the extra United napkins that Sofia had given me the day before.”

Drake says he’s grateful to the flight crew that made his farewell possible, including the attendants on his San Francisco flight and Denver-based captain Edward Goldstein and Dirk Chilian, the flight’s first officer. He also thanks Houston customer service rep Marie Robertson and all the Houston baggage handlers who got his luggage to his final destination.